During August, IAYSP Brazil prepared a YSP Choir Activity. At first, the intention was to create a virtual choir, to record a specific song, “Start with Me”, of the Vocal Livre group, with messages of hope and peace in this moment of the world pandemic. However, since the Vocal Livre group’s performance date coincided with an event for peace called “Artists for Peace” that was scheduled by IAYSP Latin America, the choir turned into a project that would present music during the event.

In October, the choir underwent a few changes and is now known as the YSP Musical Movement. Singers, video editors, and musicians work together in the YSP Music Movement, preparing musical performances and rehearsing three times a week. 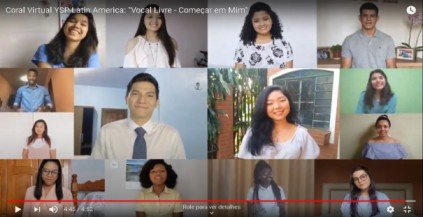