On October 15 and 16, 2021, in cooperation with UPF Czech Republic, Czech and Slovak IAYSP prepared a service project in the village of Mikulčice.

The village of Mikulčice lies in southern Moravia, Czech Republic, and was one of several villages hit by a considerably destructive tornado in June 2021. Even months later, significant damage can be seen with many houses still carrying signs of destruction. After contacting the mayor of Mikulčice, UPF Czech Republic initiated a service project in the affected village, and IAYSP helped realize this idea.

Fourteen volunteers of all age groups participated in the service project. The event developed over two days; three volunteers arrived a day prior to lend assistance. The remaining participants arrived Friday evening and went to work on Saturday. The initiative was coordinated and organized by the Caritas Czech Republic charity, which dispatched volunteers to different people and areas who needed aid. The participants helped with various kinds of manual labor, such as mixing concrete. On the last day after lunchtime, the Mayor of Mikulčice welcomed the volunteers and expressed his appreciation for their help. 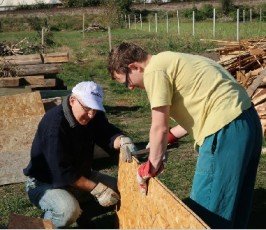