The International Day of Peace was celebrated in Ghana by Youth and Students for Peace, together with the Universal Peace Federation, and the Women Federation for World Peace. 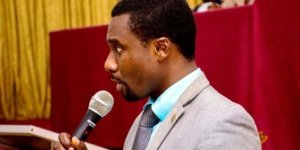 The program commenced in the morning with the Peace Road activity. Participants walked from the Ghana Military Hospital in Accra through El-Wak, to the trade Fair Company Ltd., singing songs of peace and waving the Peace Road flags. The second phase of the event was carried out at the Trade Fair Auditorium where a symposium on peace and the end of war in Africa was carried out to pre-launch the Guns Down Africa 2020 Peace Campaign, an initiative of YSP, in collaboration with UPF Ghana.

The Guns Down Africa 2020 project hopes to mobilize the youth and the civil sector in Africa to support the “African Union’s Road Map to Silence the Guns” by 2020, that aims at ending wars and ushering in an era of sustainable peace in Africa. 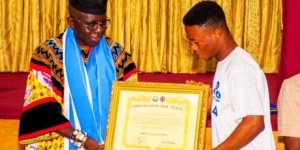 The event was attended by over fifty people who were mostly prospected stakeholders of age from eighteen and above; people who will actively work with both organizations to realize the Guns Down dream.

The President of the Ambassador for Peace Association of Ghana, chaired the second phase of the event which was mainly a symposium. The symposium had two distinguished speakers, namely: Mr. David Namoryo, Executive Secretary of the Ghana Peace Council for  the Volta region; and H.E. Prince Akere, the Southern Cameroons Ambassador for the ECOWAS region.

Both speakers stressed on the importance of silencing the Guns in Africa and commended YSP and UPF strides to support the AU. Their presentations were followed by a panel discussion that was coordinated by the Ghanaian Print Media President, Ambassador  Dan Selassie. Mr. Selassie asked pertinent questions on peace and the security of Ghana, and on the recent crisis in Cameroon where there was a massacre of the Anglophone minority in the “silence and mute” of the world. The most important point worthy of note in the discussions was that the AU will not be able to achieve the vision of silencing the guns in Africa by 2020 if the civil sector remains passive on the course. The uplifting news however, was that, UPF and YSP were already taking necessary steps to sensitize the civil sector on the vision. 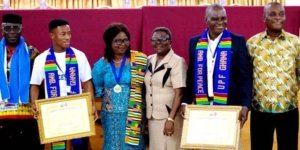 The event was spiced with the “Revelation of the Face” of the Guns Down Africa 2020. It was a time to show to the audience and media, personnel that will embody the Guns Down Campaign in Ghana. The revelation unveiled a young philanthropist, Marcus Love N. Anafu, who is considered as the youngest philanthropist in the continent. Mr. Marcus Love N. Anafu will represent the Guns Down on media and other events. He will speak as an Ambassador of the Guns Down Campaign from Ghana. It is hoped that Mr. Anafu’s popularity and personality will attract many youth into becoming involved with the project and help mobilize one million people signing the  “Guns Down Accra Declaration by 2020;” as a milestone towards the herculean task of ending wars in Africa and opening up the continent.

Dr. Mrs. Osei, Secretary General of UPF Ghana, gave the keynote address emphasizing that the UN and the world had celebrated the peace day for thirty-six years with minimal to progress on substantial peace.

She emphasized that emphatic efforts and more heartfelt commitment was needed to move the world towards peace. While referring to the founders of UPF and YSP, Dr. Osei said that Rev. Moon and Mrs. Moon had indicated in their guidance that peace can only come when the UN is reformed to hold a bicameral structure where the religious and politicians can work towards one vision of peace.

Two laureates were decorated with the Ambassador for Peace Award and it happened that Mr. Marcus Love N. Anafu was one of the recipients.

The event ended with photoshoots and the signing of the two banners: the Peace Road and the Guns Down Africa 2020 banner.

It is no exaggeration that the International Day of Peace for 2018 in Ghana was an exceptional event.