In celebration of Africa Day 2020, the International Association of Youth and Students for Peace (IAYSP) presided over the African Day Youth Virtual Conference on Monday, 25 May 2020, on the theme, “A Leap into the First World: Africa can do it”.

The event was organized in collaboration with several partners: the Ghana National Scout Association (GA), Water for Rural Africa, the Pan African Leadership and Entrepreneurship Development Centre (PALEDEC) of Nigeria, VODEC Africa and Clifvof International. More than one thousand participants from across the world were engaged during this maiden YSP webinar on both Zoom and Facebook Live. The event was moderated by Rev. Tegha King, President of International Association of Youth and Students for Peace Ghanal and co-moderated by Bisola Babalola, a university educationist; and journalists from Kwara State in Nigeria. 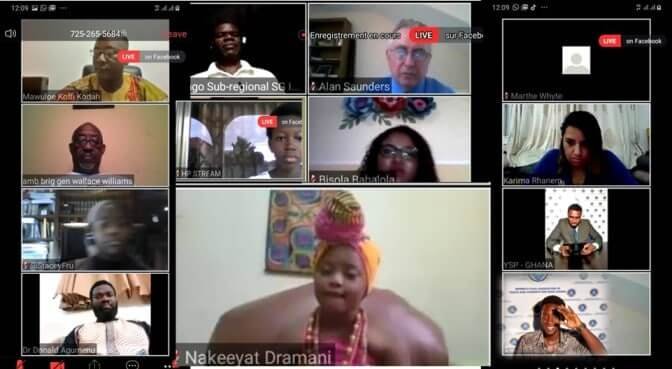 Four SDG themes were covered during the event, focusing specifically on the contribution and the potential impact youth can bring to bear on the SDG goals. These goals were related to the following: Goal 4: Quality Education; Goal 8: Decent Work and Economic Growth; Goal 9: Industry, Innovation and Infrastructure; and Goal 17: Partnerships to Achieve the Goal.

The event was graced by well-informed speakers from various backgrounds and fields of knowledge, as well as a renowned child artist who exhilarated the audience with an amazing poem performance. With a gender balanced, international, intercultural and interracial panel of almost all age ranges, the presenters engaged the virtual audience with professional and life experiences including:

1.) Consular General of Antigua and Barbuda to Nigeria – Brigadier General, Ambassador Wallace W. Williams, as special guest of the event;

2.) President and CEO of VODEC Africa; an NGO with headquarters in Ghana, Daniel Asomani;

3.) President and CEO of Saunders Consultancy LLC – Prof. Alan Saunders from the US;

4.) Founder and CEO of Water for Rural Africa – Dr. Donald Agumenu from Ghana;

8.) Daniel Matalon Founder of Is there Enough, from the USA.

The speakers addressed the skepticisms of some youth on Africa’s political and socio-economic paradigms. They identified existential leadership limitations in the continent as the main causes of the web of consternation, doubts, fears and myopic mindsets of some African youth; resulting in entrenched mediocrity in the life options of many.

Speakers deliberated on topics with intentions to identify some of these chronic African problems and made suggestions on how young people could take advantage of the numerous natural resources and human capital on the continent; to change the socioeconomic trajectory, and leap into industrialization or the first world. The special guest, Brigadier General Ambassador Wallace W. Williams, spoke on the topic, “Preparing the African youth for the future of Africa”. He stressed on the need for African solutions for African problems. Instead of only focusing on achieving goals from goals from the United Nations, African leaders should set yearly goals for Africa as a continent, for instance, on education, health, and so on. Brigadier General Ambassador Wallace W. Williams also highlighted the need to boost E-learning on the continent, for which himself and other key figures had established the ‘Africacy’ project to promote E-learning and education as the basic first step for Africa and the African youth. He also spoke about entrepreneurship, ownership of resources, agriculture and food security, and transition of youth to leadership in the continent, and transparency of youth representation.

During the deliberations, Daniel Asomani spoke about entrepreneurship and the numerous opportunities around the globe. He said young Africans should change the economic trajectory from a consuming to manufacturing one. While identifying that a lack of funding and business partnerships were Africa’s business prevailing weakness for those who aimed at venturing into capital intensive businesses, he acknowledged that the Africa Continental Free Trade Area was a great business opportunity that Africans must exploit. Asomani suggested that a United States of Africa Trade be put in place for Africa’s sustainable development.

Dr. Donald Agumenu – a Ghanaian politician, a philanthropist and one of Africa’s finest gems – brought to light the underpinning reasons for Africa’s stagnation in the political and economic sectors. He said it was high time Africa rediscovered herself, by readapting to our values, cultural heritages and ethics of probity, equity, justice, mortality and level-headed politics that had in the past given the continent a unique identity, and made us a people of great integrity following colonialism. Agumenu accentuated that today’s democracy was riddled with corruption and “the money factor”, and that this has provoked much disorder in the continent. He encouraged African youth to embrace democracy as the guide for the rule of law and order. Dr. Donald Agumenu indicated the role of the media and condemned the use of social media for the dissemination of fake news and other ill-minded ventures. He urged people who engaged in such acts to consider the negative impact of such actions on the continent as a whole.

The first characteristic of African youth is their capacity to carry out public speaking. He gave the example of Nakeeyat who gave an excellent presentation of a touching poem on our environment. He said the continent has something that the rest of the world does not have, the courage to speak eloquently.

The second characteristic, Saunders explained, is the connection of spirituality and the physical realm in Africa; where both are seen as a whole. The third is the importance of family and community and tribes in Africa. He noted that all the beautiful traditions and skills we have as a continent need to be preserved.

Africa’s youngest International Award Winning Author, Stacey Fru, thanked all participants on behalf of the African youth for taking part in the webinar. She spoke on the power of literacy to the African youth. Fru began her presentation by noting that the youth in Africa are in a position of setting the future for the rest of their lives, however, this cannot be achieved without literacy. Literacy, she explained, has been defined as the ability to understand, identify, interpret, create, communicate and compute, the basics of which should be learnt in primary school. African youth need to learn how to read and write. She observed that in many schools where she had the opportunity to engage the youth, there is lacking infrastructure to promote literacy. She added that the poverty cycle, illiteracy and ignorance loop are also contributing factors. Africans, she lamented, do not seem to own or control the needed foundation for education and literacy. Fru ended her presentation by identifying two ways through which Africa can empower its youth: education and community engagement. Education is the first way, since with education, we can move to community engagement through activities aimed at empowering and inspiring others. She added, “We need to change the mindset of the community and address the root causes of the growth of the continent. We do not have to lose the value that literacy creates.”

Moroccan Multiple Award Winner and President of International Center, for Diplomacy, Karima Rhanem, spoke on the topic of how young people were and are leading the fight against Covid-19 and what we need to focus on. She began her presentation by remarking that we are becoming global citizens and have a globalization of issues affecting us, which implies that we need to interact across the world with issues that are affecting us and contextualize these issues.

Many CSOs and especially young people, she revealed, have been at the frontline of tackling the Covid-19 pandemic as volunteers and health workers. There has been a great deal of solidarity clearly observed over the world, and also in Africa, and young African entrepreneurs are innovating and creating, using artificial intelligence (AI) to contribute to the fight against Covid-19, such as with AI masks for protection and drones for raising awareness to help manage the virus. Although Africa has been in the process of being digitalized, this transformation has been accelerated through Covid-19, particularly digitalization of all services. Many services have transitioned to digital as a result of the lockdown and there have been strategies to have e-governance and digitalization of services. Rhanem mentioned the creation of free education platforms to enable students to continue studying despite the pandemic. She, however, noted the need to think of strategies to raise the capacity of teachers and students to create a digital culture.

It was time, she emphasized, to adapt different strategies to change the mindset of the African population. In a transition to a post covid-19 era, we need to question if our current policies are still valid. We need new business models. Rhanem also spoke on the generational gap, and the need to develop policies that include a generational dialogue since this could be a problem for youth to access services. We ought to unlock the potential of the youth, and take the opportunity presented by the pandemic to rethink current needs, future trends and how we can harness the potential of our youth. Daniel Matalon, founder of “Is there Enough” from the USA, spoke on the topic, “Leadership is not lottery”, focusing on seeing Africa as an emerging continent with tremendous human resources. From the outset, he asked the audience to respond mentally to two questions: What they perceive to be the major weakness of Africa, and what they perceive to be their own major weakness.

These questions, he noted, stem from the concept that weaknesses are the seeds of our strength, so long as we know how to manipulate weakness into opportunity.

His goal, Matalon explained, is to make the world work for one hundred percent of humanity which is mathematically possible to do. The campaign he is leading, “Is there Enough campaign”, is an accidental conversation on the approach

to looking how to expand the available investment dollars in human survival. He said that globally, the world is facing a three and half trillion dollar deficit on what is required to invest in human survival by the way it has defined the 2030 goals, which is an amazing evolution of language and culture to have such a global community to set those goals. Matalon asked young leaders, especially those under ten years, to consider the fact that the global community that we refer to is primitive in terms of leadership. The conversation centered on ‘is there enough’ is to suggest that resources do not produce wealth, although our economic systems appear to be based on this concept. If wealth were based on resources, the Democratic Republic of Congo (DRC) for instance would be the richest country on Earth.

According to Matalon, the reason why the DRC is not able to maximize its resources is that wealth is based on agreement. In view of this, the answer to ‘Is there enough’ is conditional and whether there is enough or not, the answer is agreement, not war. The Impact LaunchPad Campaign, which is currently being developed, therefore focuses on launching a peace treaty to promote that we do not have to wait for leadership but welcome the idea that humanity can make its own peace with each other. The audience was refreshed with a poem entitled, “Our Environment Our Home”, recited by an eight-year-old Ghanaian poet, Nakeeyat Dramani Sam. She thrilled the virtual audience in the most mesmerizing audio visual format asking Africans to stand up for Mother Earth considering, as she said, “Mother Earth is all we have.”