On October 3, 2022, the chapters highlighted were from region 1. The program is composed by IAYSP – La Union, IAYSP – Pangasinan and IAYSP – Ilocos Norte.

In this episode, the chapter utilized vlogging and re-enactments of their strategies on how they inspired other youth to join activities and become a member of their chapter. 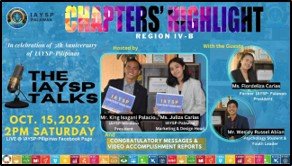 On October 15, 2022, the chapters highlighted were from region 4B, which are IAYSP – Palawan and IAYSP – Mindoro. On this episode, a talk show was held on how IAYSP changed their perspective in life and how it helped the community, especially in Palawan.

On October 16, 2022, the chapters highlighted were from region 5, involving IAYSP – Bicol, IAYSP – Albay, and IAYSP – Sorsogon. This time, the chapter hosted a news patrol that provided examples of their hard work and achievements. 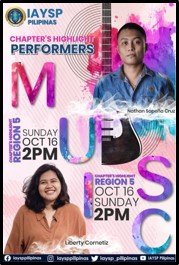