Berlin, Germany – The second session of the Europe-Middle East International Leadership Conference 2022, was held under the title, “Peace Road: A Global Project Toward Sustainable Peace.”

Sessions I and II, both took place on July 26, 2022, in the ballroom of the Berlin City Mission.

An International Leadership Conference was held in every region of the world in the summer of 2022, with the overall theme, “Towards Peace and Security on the Korean Peninsula: Building a Global Culture of Peace.”

In Session II, the Peace Road Initiative was introduced as a global campaign that brings young people together from nations with a history of conflict. How can young people turn the situation around by using innovative tools and resources for conflict resolution and reconciliation? How can they mobilize leaders from the fields of politics, religion, and civil society and contribute to transforming “swords into ploughshares” in Europe, Northeast Asia, and around the world? The speakers of this session, mainly young leaders and youth representatives of international organizations from Europe and South Korea, brought complementary perspectives on young people’s role in the Peace Road Initiative. 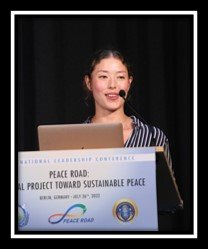 Mrs Mélanie Komagata, Postgraduate Student, East Asian Studies, University of Geneva, the moderator, committee member of the Swiss chapter of the International Association of Youth and Students for Peace (IAYSP), an organization that is affiliated with UPF. Mrs Komagata introduced the platform to which participants could submit their answers to two questions connected to the topic of the conference. 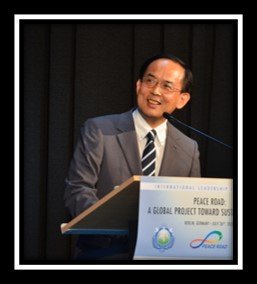 He then gave an introduction to the International Peace Highway, which the founders of UPF and IAYSP first proposed in 1981 at the International Conference on the Unity of Sciences. “The construction of such a Peace Highway would unite the entire globe on the day of its completion,” Dr Matsuda said. “The world would be one village interconnected by one road system.”

The process of constructing the highway would provide a common purpose for the governments and the people of the world, opening national lines of commerce and recreation, which would stimulate the exchange of culture and goods and encourage living together in harmony as neighbours. Dr Matsuda mentioned that in 1996 a pilot tunnel construction already commenced and that until now 500 meters have been excavated.

He also called for an immediate stop to military aggression in Ukraine, emphasizing the role of Ukraine in the global project as a country connecting Europe and Asia. In conclusion, he read a quote from Mother of Peace, the memoir of UPF co-founder Dr Hak Ja Han Moon: “The passion of youth transcends borders and breaks down walls.” 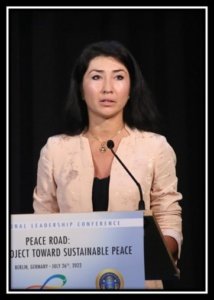 Dr Farida Valliulina, the Lawyer; UPF Representative to the UN in Vienna, Austria, a lawyer specializing in public international law and human rights law, currently representing UPF at the United Nations in Vienna, started her presentation by reading statistics from the UN 2019 World Population Prospects, according to which an estimated 1.3 billion people between the ages of 15 and 24 were affected by conflict.

“Considering that 65 percent of the population on the African continent consists of young people, it is becoming increasingly important that, rather than seeing young people as agents of conflict and destruction, they are seen as agents of peace, intercultural and inter-religious dialogue, and advocates for social cohesion in their communities,” Dr Valiullina affirmed.

She emphasized that “enhancing structures that promote the participation of youth in peacebuilding will actively contribute to their engagement with decisions that affect their well-being.” Referring to the 2015 Amman Youth Declaration on Youth, Peace and Security, she asserted that young people are key agents of change and crucial actors in the implementation of the United Nations’ Sustainable Development Goals (SDGs).

Dr Valiullina also explained the five pillars of young people’s “meaningful participation” in peace processes and dispute resolutions: participation, protection, prevention, partnership, and disengagement and reintegration. To conclude, she showed examples of youth participation in decision-making processes around the world and suggested the next steps in which the UN can contribute to empowering young people. 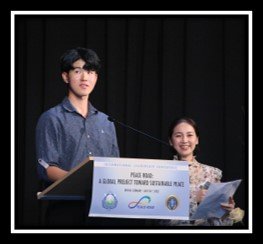 Mr Soo-bin Park, Activist, of Peace Road Korea, a student and a youth activist of Peace Road Korea, told of his personal experiences taking part in Peace Road activities in South Korea and around the world. As a son of Korean and Japanese parents, he often felt heartbroken whenever Korean-Japan relations became difficult, or whenever he thought of the division in Korea. Therefore, he said, “the vision of the Peace Road project represents hope.”

He took immediate action when he heard about the Peace Road 2022 activities launching in Germany. He flew there right away with the hope that his homeland, Korea, will reunite one day just as Germany reunited in 1990. The audience was stunned when Mr Park described cycling 1,200 kilometres with a fellow Korean student, carrying the Peace Road banner with them throughout Germany, Austria, and the Czech Republic; arriving in Berlin just in time for the ILC.

He concluded by expressing that world peace cannot be accomplished solely by the efforts of governments; there needs to be a change within individuals as well. 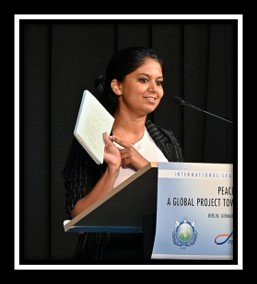 She expressed her delight in meeting all those attending the conference. Due to youth engagement often being used simply by institutions as “decoration” in declarations, she expressed gratefulness to UPF and IAYSP for taking genuine steps toward engaging youth.

Ms Lekha gave the example that instead of being ready for war, building trust between all parties is key to creating a world of peace. She also related her own experience, showing that young people today are more interconnected than ever, as a result of advances in technology and globally available channels of communication. She concluded by saying that all human beings make one big family. “Differences, distinctions, and borders are all man-made realities which can be and should be changed into one identity, which is humanity.” Young people and the Peace Road Initiative could be the tool for it. 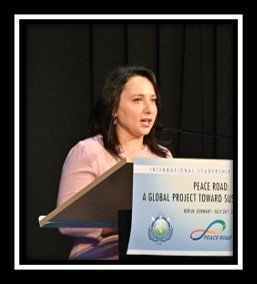 Dr Diana Esanu, Sub-regional Director, IAYSP East Europe, from Moldova, a medical doctor and cardiologist who is also the director of IAYSP for Eastern Europe, talked about the historical importance of the Roman Empire’s road system and the Silk Road.

The roads the Romans built were essential for the growth and maintenance of such a vast empire. Around 400,000 kilometres in length, these roads were built with durable stones, most of which still exist in Italy today.

Similarly, the Silk Road, a network of Eurasian trade routes, over 6,400 kilometres in length, has played a central role in facilitating economic, cultural, political, and religious interaction between East and West.

Today, such routes can be found in the European Union (international E-road network) as well, which she had a great delight in utilizing for her travels.

Dr Eșanu described Moldova’s situation, where customs and border control cause numerous inequalities (difficulty of mobility, limited access). This was especially clear when Ukrainian refugees, many of them children, tried to cross the border with Moldova in the spring of 2022 and had to stand in line, sometimes for days, to be able to enter Moldova.

IAYSP Moldova, however, responded immediately to the great influx of refugees from Ukraine, through volunteering and donations, cooperating with the national refugee centres and establishing the Sunflower Center, which was created to help refugees, in the Peace Embassy. Dr Eșanu described the main activities of IAYSP Moldova, which supports Ukrainian mothers with their children. She concluded with reflective questions as food for thought.

To the first question—“What are the prerequisites for the International Peace Highway to be realized?”—Ms. Komagata read the top answers submitted by the audience: money, cooperation, trust, vision, confidence, forgiveness, love, hope, peace, unity, and reconciliation.

Ms Lekha added that there is also a need for dialogue between the main actors, and cultural openness among people, giving the example of Indian and Pakistani citizens.

Dr Valiullina commented that channels of communication between religious leaders are also crucial, as well as hard work, a clear vision, and leaders who are open, motivated, focused, resilient, and brave – people who are willing to break down walls between nations.

Dr Eșanu said personal contribution is also necessary. Through investment, she said, one can feel that one is the owner of a project.

To the second question—“What would the consequences be if the International Peace Highway was realized?”—many answers were submitted by the audience. One person expressed that, “people would get to know each other more and learn to work together. This would help them realize how many similarities people have, and that would motivate them to work even more together.”

Another inspiring answer was that such a highway would, “resolve anxiety connected to opening oneself to the rest of the world and to explore and understand it.”