YSP Samoa held its first peace project at the National University of Samoa during an annual event called Fun Day event, put together by the Peer-peer Initiative (Student committee).
The main purpose of the KOJA (Korean & Japanese culture stall) stall was to showcase the Korean & Japanese culture and promote the reunification of North and South Korea through martial arts.
Showcasing unique aspects of the Korean and Japanese culture, they included a Martial arts demonstration by WTMF Samoa (Wonhwa Tong-Il Moo Do Federation), together with KLAS Taekwondo, a local Taekwondo club run by Master Kaino Kasimani, Samoa’s first Olympic gold medalist in Taekwondo. Both martial arts originated from Korea.
The collaborative martial arts performance by Tong-Il Moo Do and Taekwondo was a symbolic display of the reunification of North and South Korea with the hope that one day, the two Koreans can be united as one nation once again. 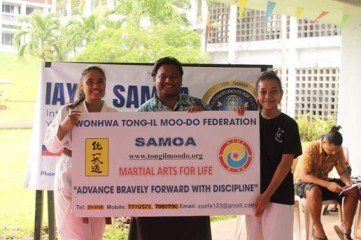 At the end of the performance, the martial artists posed together in the shape of a crane and shouted out “Hyojeong!”. This was to give respect to the Grandmasters of Tong-Il Moo Do and Taekwondo. After the martial arts demonstration, several students and teachers became inspired to register and sign up for Tong-Il Moo Do and Taekwondo.
The KOJA stall included fun games and activities such as an Origami-making session, writing your name in Korean characters, ‘Guess the Anime’ and ‘Kick to win.’ For each game, they received a box of Korean ramen as their prize. Students were particularly interested in getting their names written in Korean characters as it was something rare and unique that they could keep as a personal treasure.
Overall, the KOJA stall enabled students and university teachers to learn more about Korean and Japanese culture. Also, through collaborating with Tong-Il Moo Do and YSP Samoa, members of KLAS Taekwondo were able to learn about the Hyojeong culture and the values of the ones who founded both.
This was in alignment with the motto given by Doctor Hak Ja Han Moon: “Opening and settlement of the Era for Heavenly Unified Korea.”